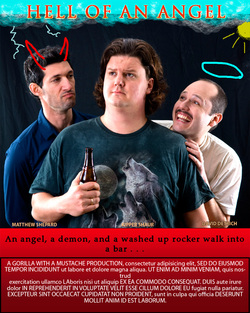 An angel, a demon, and a washed up rocker walk into a bar . . .
One Hell of An Angel - (released on DVD)
A demon with an existential crisis and an angel with PTSD team up to save the career of a washed up rocker.

Demon Kyle is a stabber on the third level of hell. He knows his business. But when he starts wondering about the nature of life and death, his superiors shut him up and send him to the “Angel in Training Program.”

Angel Mezudio has been around a very long time—so long that he developed PTSD and goes catatonic at the sight of blood. Relegated to feeding parking meeters and cleaning up dog poop, Mezudio is affraid to trying anything new, but his boss has other ideas. Mezudio is charged with training the stabber Kyle to be a good angel and earn his wings...or at least stop stabbing everyone.
Together they are the worst guardian angels a sad, washed out rocker Mike Valentine could ever hope for. But what the body wants and the soul needs are two different things.

The secrets of the Universe are slowly revealed to Angel and demon as they bumble their way through helping Mike repair his life and music career and avoid two demonic saboteurs. Hilarity ensues.
"Joint Effort" short wins 2013  National Film Challenge!

The short film I wrote and created with my team Gorilla With a Mustache Films won the big prize for "Joint Effort".

Below is the official announcement
**********
The wait is over! Here are the Awards for the 2013 National Film Challenge!

And our prize is:
Best Film of The National Film Challenge

See the official Gorilla With a Mustache website to see all the films I wrote and co-produced.
All content (C) Eruch Adams unless otherwise noted.